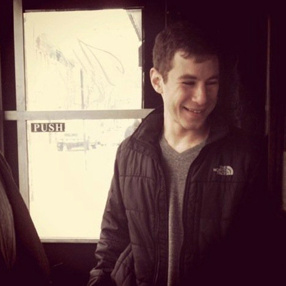 David is the Literary Editor of The Nation. He has contributed essays on politics, history, and literature to, among other places, The New Republic, n+1, Bookforum, and Dissent. He holds a PhD in history from Columbia University and is at work on a forthcoming book on the history of American socialism.

Previously co-editor of Dissent, he held a Richard Hofstadter Fellowship while at Columbia and taught in the college's Contemporary Civilization program. He grew up in Minneapolis and currently lives in New York.

"In Praise of Amateur Politics: Protest Movements and the American Left," Dissent

"Men in Space: Tom McCarthy and the Novel of Disenchantment," The New Republic

"Marxism with Soul: The Cultural Criticism of Marshall Berman," The Nation

"The Next Majority: Prospects of the Sanders Campaign," Dissent

"Finding a Way Back Home: The Many Philip Roths," The Nation

"Worlds in Waiting: The Promise of Little Magazines," Dissent

"The Ambivalence Artist: The Reluctant Anarchism of J.M. Coetzee," Dissent

"Citizen Politics: The Left and the New Protest Movements," Dissent

"The Soapbox Left: City Politics and the Left," Dissent

"What Happened to the Political Novel?," Dissent

"On the Life and Times of Marshall Berman," n+1

"Optimism of Intellect: Little Magazines and the Left," Krytyka Polityczna

"Memory as Homeland: George Konrad and the Question of Antipolitics," Dissent